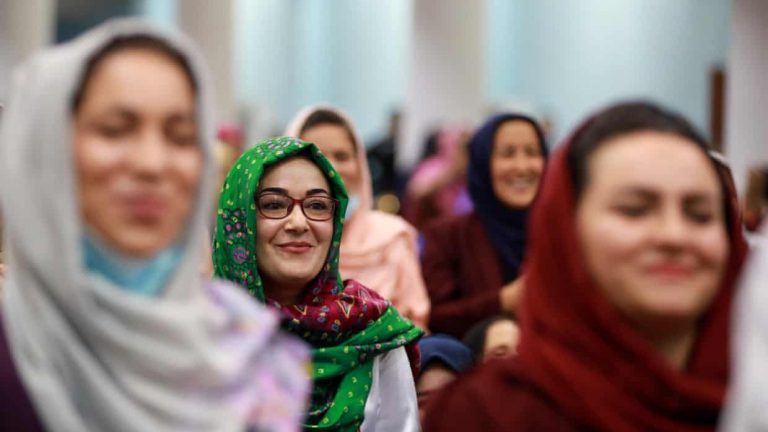 By: Ruchi Kuman
The Guardian

Farahnaz Forotan was three when the Taliban had arrived in Kabul. It was 1996. “I have this memory of a snowy day, I was sitting on my mother’s lap, in a minibus, and she was crying. I didn’t understand why she was crying,” Forotan says. It was the day her family became refugees.

“It was the civil war, and we had to leave our home and country to live in Iran – alive, but living in pain and facing discrimination,” she says.
Now Forotan, whose family returned to Afghanistan in 2001, is making sure the militants who disrupted her childhood don’t use the upcoming peace talks to roll back gains women have made.

Forotan, a journalist, is traveling the country for her social media campaign, asking women what rights they won’t stand to see negotiated. Video clips are uploaded online and shared using the #MyRedLine hashtag. The testimonies are being used to lobby Afghan leaders, foreign diplomats, and civil society groups.
“Today, the US and the world are surrendering us to the group that still kills us every day … in our streets, in our schools, and even in our homes. We have been numbed into silence, by war, violence, and pain, for far too long. But now we want to shout,” says Forotan.

Talks between the Taliban and the Afghan government could start in Qatar this week, after the grand assembly, under pressure from the US, agreed on Sunday to release 400 militant prisoners, a Taliban condition for joining the negotiations.
Many women fear that freedoms gained in the 20 years since the fall of the Taliban will be sacrificed in the talks. Just five women are included in the 21-member negotiating team.
Looking away from Forotan’s camera to protect her identity, a middle-aged woman from Helmand, one of the provinces worst hit by conflict, speaks in one of the videos:

“I want peace that lasts. A five-day peace is not good for me or anyone. I was whipped in public once while taking my sick child to the doctor. When I asked the man why he hit me, he told me not to leave the house without a man. My husband is disabled, I am the breadwinner of the family. How can I not leave the house? We want permanent peace in which women’s rights are not trampled.”

Nagina Anwari, a software engineer, is helping with the campaign. She says the peace process scares her. “I am scared because we are represented by only a few symbolic figures negotiating a possible return of the Taliban on my behalf.”Advertisement
Anwari, who is from Kandahar, once the capital of the regime, says memories of the Taliban’s atrocities are still fresh.
Those involved in the peace talks don’t know our concerns about losing everything we have worked for Nagina Anwari

“I remember when I was in the first grade and they burned down my school because they disapproved of girls’ education. I remember comforting women who survived acid attacks from the Taliban because they chose to join the workforce, just like I do. These fears are real, our panic is real,” she says. “[Those involved in the peace talks] don’t really know what our red lines are, or our concerns about losing everything we have worked for.”

Forotan’s campaign has the backing of UN Women Afghanistan. She says it is important to collect many different views “because the will of a girl in the capital, Kabul, is different from that girl who lives in Panjwayi [Kandahar]”.
“The girl in Kabul is struggling to make ends meet and seeking equal rights, while the girl in the village stays awake all night because she can no longer go to school and must get married forcefully. Their circumstances are different so their demands are different,” she says.
But she adds: “The problem is not in the difference of the demands. The problem is that some want to use this [difference] as a hammer to hit us on the head with.”
During her travels, from cities to remote, insecure districts, Forotan came across heartbreaking stories. “I met young, very smart girls married early, [who] lost their husbands to war and turned into young widows with small children. I saw a woman who had lost more than 20 members of her family.

“Another woman who had been married three times in the same house; first to her husband’s brother after he was killed, then again to the younger brother after the second one was killed. What is left of her but an empty and desolate body that was sacrificed to war and ignorance?” she says.
But Forotan also gathered stories of strength. “I witnessed women who have gone through all these hardships and are still working tirelessly so their children can study. I was left speechless meeting girls who so boldly challenged the stereotypes of society in their male-dominated cities,” she says.

Afghan women, she says, are not just worried about their own rights. “Women are worried about the order and structure that we’ve achieved so far in the last 20 years. Even if it has its shortcomings, it is worth saving. These are not feminine or masculine demands; they are the general concerns among the people.”

“MyRedLine is my pen!” – Farahnaz Forotan